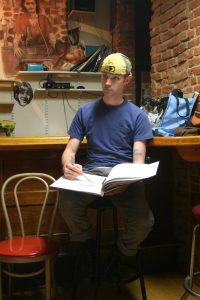 My work involves the debate of existentialism and memory; how we are versus how we were.
This work is figure and narrative based, the people interact with each other while making
decisions based on their environment. The figures are drawn from models, sourced out of
magazines and fashion catalogues, rendered in ballpoint pen and ink wash. Their environments
are pieced together from photographs collected in family albums and years of photographing
my surroundings, from old apartments to vacation locales, and built up on the paper through
Photoshop and a photo-transfer technique. A compromise of image is created as the rendered
ink drawing is built up and the photograph is broken down during the printmaking process. We
use experience, hear-say and ephemera to recollect memories. Various source material is
broken apart and pieced back together to show new stories made from old ones. The people
and places in the work are amalgamations that create a cohesive experience that seems strange
but familiar.

Bio:
Jason Milburn was born and raised in Northeast Ohio. He received his BFA in Drawing and Printmaking from the Cleveland Institute of Art in 2003 and his MFA in Painting and Drawing from Kent State University in 2017. In 2015 he was awarded an Individual Excellence Award and spent the summer at the Fine Arts Work Center in Provincetown, MA; both through the support of the Ohio Arts Council. He has exhibited throughout Cleveland and Ohio and been included in numerous juried shows nationally. He is currently represented by Bonfoey Gallery in Cleveland, OH.